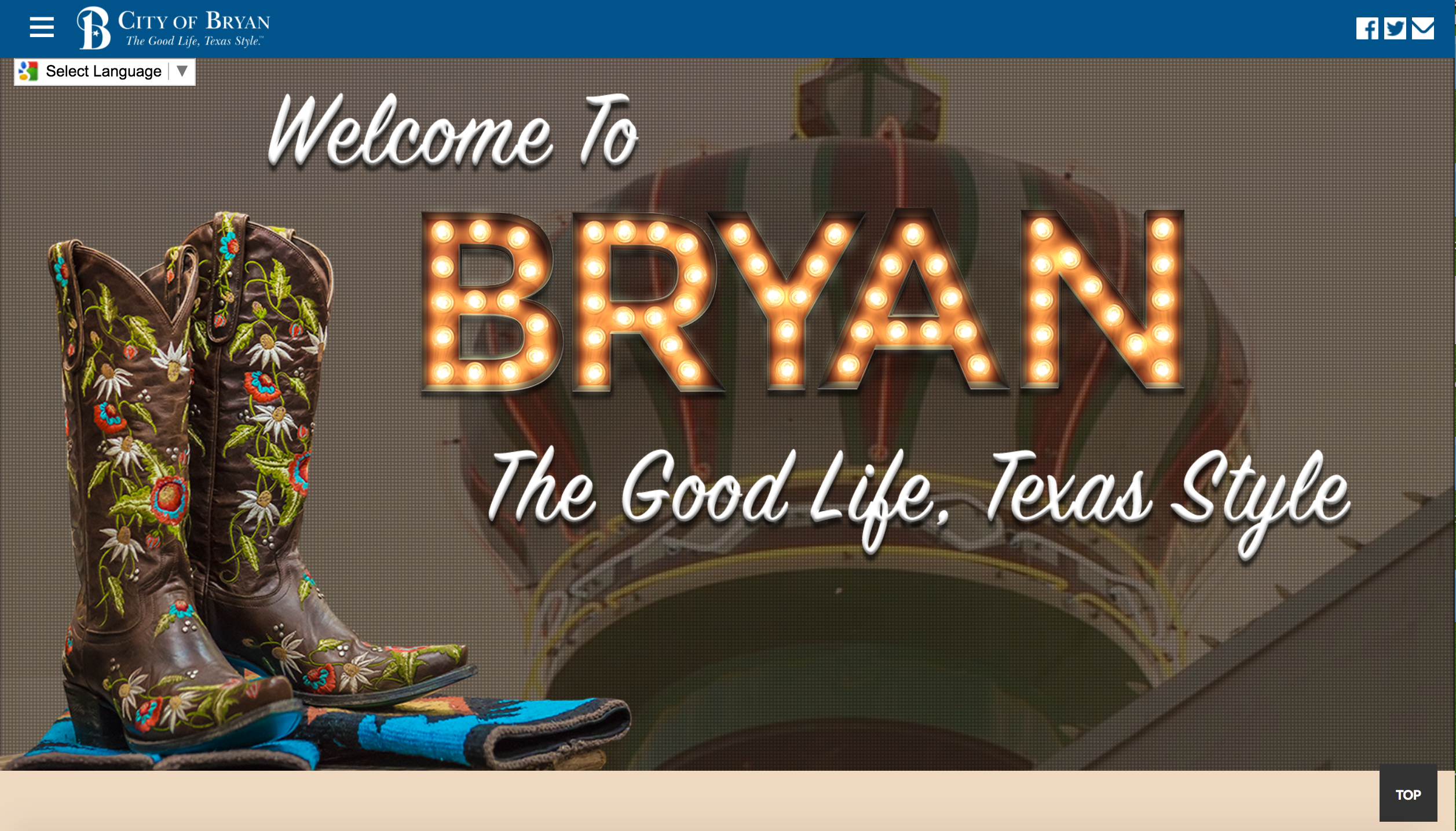 City of Bryan: Visiting
This was a complete and total departure from what we had been doing in terms of tourism and visitation marketing for the City. We had a page, but not like this. We decided to create a microsite that truly would serve as a tourism destination for people interested in visiting Bryan. And, needless to say, it’s a hit. The site is bold and enticing with strong typography and visuals, while at the same time offering the perfect amount of information to tease the person and keep them interested. This was a really fun redesign, and was all coded by hand using Foundation as a mobile-responsive framework. This site also uses a mobile menu design and structure that puts the mobile menus on the bottom of the screen for optimal usability based on the size of screens and the reach of an individual’s thumbs. 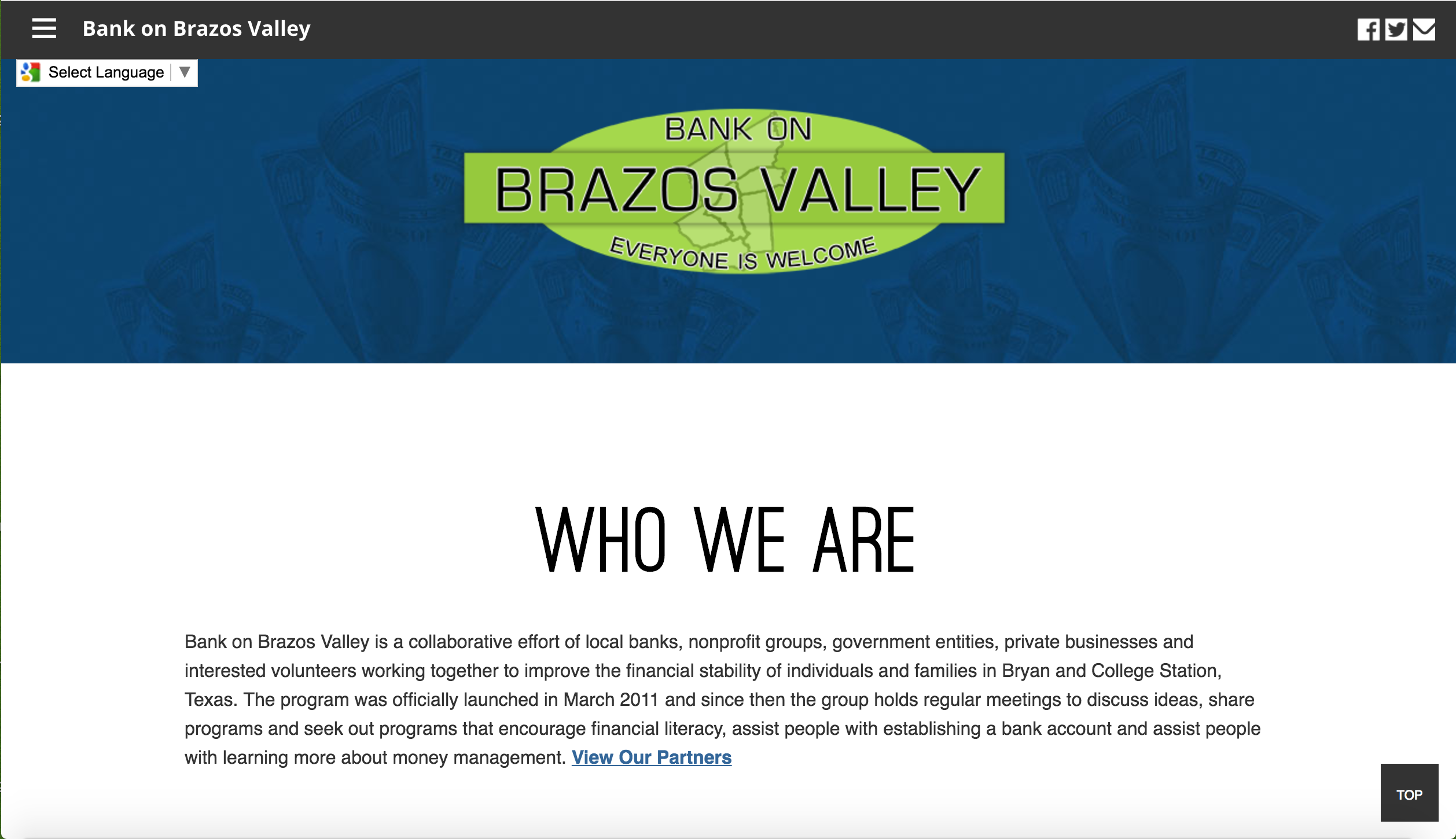 Bank on Brazos Valley
This website was a mess. It’s a great program that the City of Bryan funds and manages to help residents see the value of bank accounts as opposed to payday loans. But the website really needed some work as it hadn’t been redesigned in nearly 5 years. This new site takes a modern, one-page approach with bold colors, muscular yet clean typography, and large visuals, that try to impress, while at the same time inform people. The readability of this site, though, is the where the real victory is. It’s much more intuitive now. This site was coded by hand using Foundation as a framework. This site also uses a mobile menu design and structure that puts the mobile menus on the bottom of the screen for optimal usability based on the size of screens and the reach of an individual’s thumbs. This site went from concept to completion in under three days. 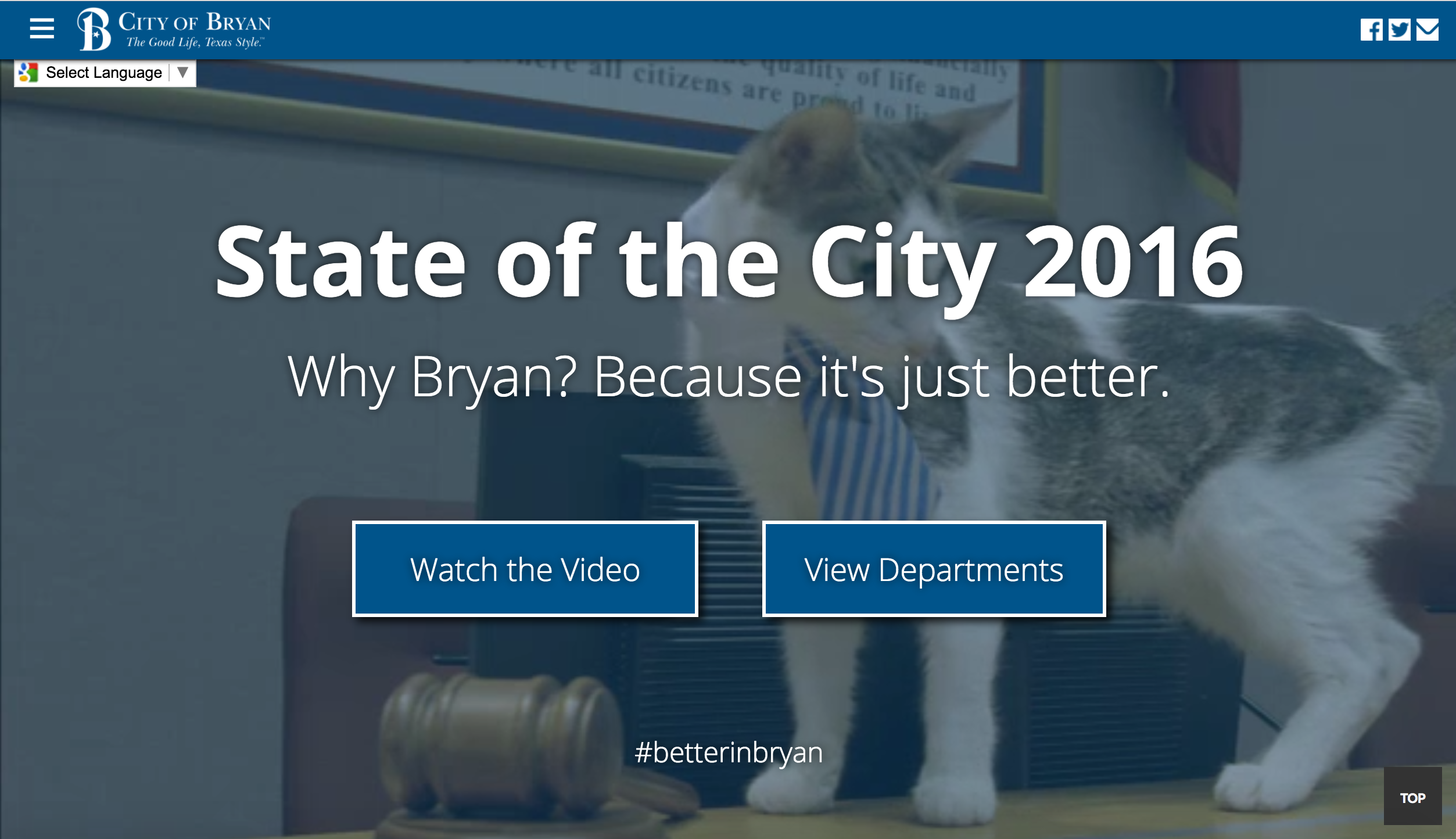 City of Bryan: State of the City 2016
What started as a quick video more than three years ago has evolved into an award-winning yearly project for the City that involves a microsite and video components. This year’s theme was to promote the Bryan Animal Center as the backdrop to each of the different departmental reports. So the idea of cats and dogs running City Hall just seemed to make sense. It was a very ambitious project, and one of the most fun things I’ve worked on in my career. This site was coded by hand using Foundation as a framework. This site also was my first to utilize a new mobile menu design and structure that puts the mobile menus on the bottom of the screen for optimal usability based on the size of screens and the reach of an individual’s thumbs. 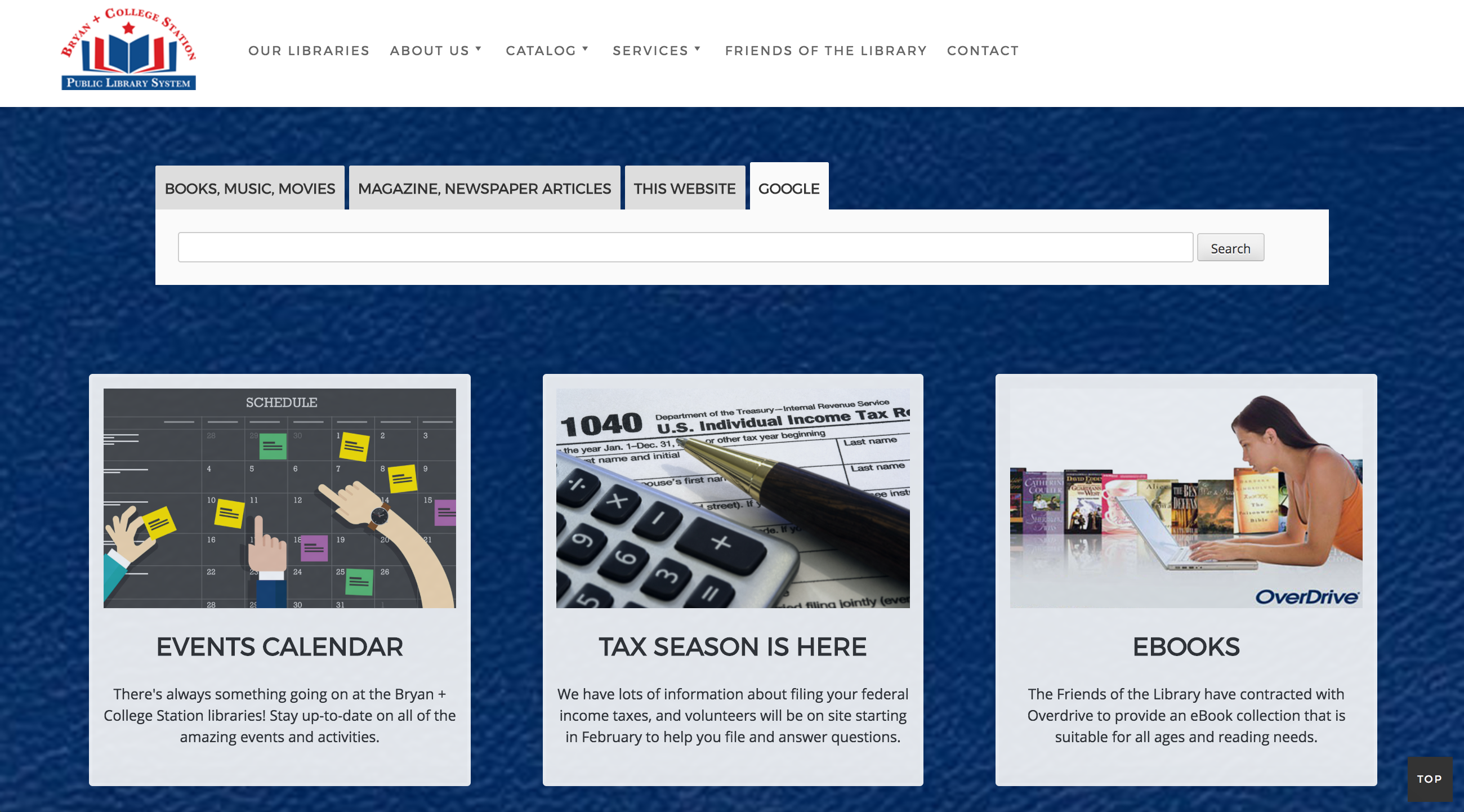 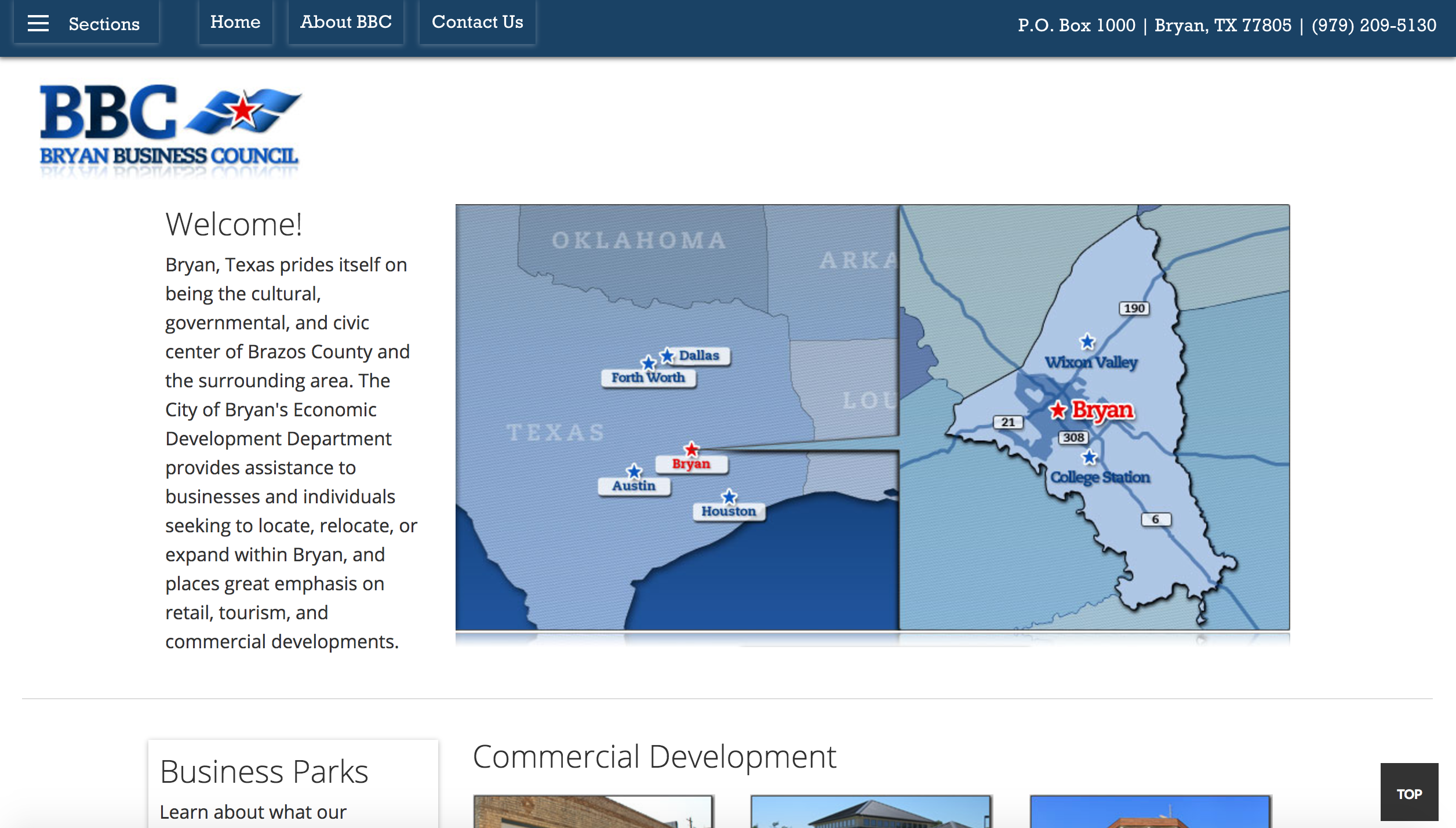 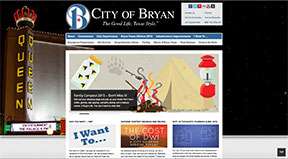 City of Bryan
Main website for the City of Bryan, Texas. The City of Bryan’s web redesign took just over one year (basically done in my spare time) and involved a complete sitemap overhaul, content cataloging, outdated content purge, and top-to-bottom custom redesign and site architecture rebuild. It was a massive project, by far the biggest of my career, as we whittled down more than 10,000 files to just over 1,200, while not losing any relevant content. The site’s page count dropped from approximately 650 to just under 150, and with the new site using WordPress, we are now able to be nimble and responsive to any situation. We are also now mobile-friendly, and have seen web traffic increase approximately 30% since the redesign, with mobile traffic rising more than 68%. 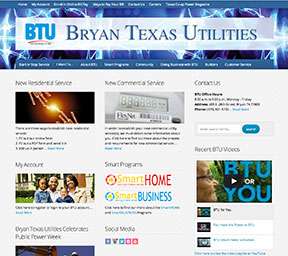 Bryan Texas Utilities
Utility company website for the city of Bryan, Texas. BTU is a large and respected public power utility owned by the the City of Bryan. Launched in September 2013, the redesign of the BTU website went from concept to completion in less than 10 weeks and brought the site up to date with current web standards and mobile-friendly responsive design. This was my first “major” project launch in my role as the web communications specialist for the City of Bryan. In September 2014, the BTU website redesign was awarded the 3CMA Savvy Silver Circle Award by the City-County Communications and Marketing Association – recognizing it as the No. 2 municipal website in the nation for communities with populations less than 85,000. The judges lauded its user-friendliness and ease of navigation, as well as the time frame in which the project was completed in their remarks. 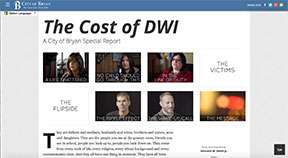 The Cost of DWI: A City of Bryan Special Report
The Cost of DWI was a special project and microsite conceived of by myself, Ryan Stout and Officer Kelley McKethan of the Bryan Police Department. We wanted to do something that was more than just a standard public service announcement in the spring of 2014, and so we took on the challenge of interviewing victims who had been impacted by drinking and driving. It was an amazing experience, and so in 2015 we decided to focus on the flipside – offenders. Another amazing experience, and we plan to continue with new chapters of the project each year. Since the initial launch, we have had more than 5,300 page views on this microsite, and the project has received multiple awards, including a special recognition award from Mothers Against Drunk Driving. 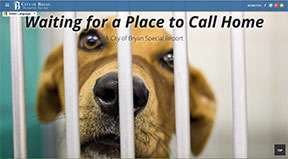 Waiting for a Place to Call Home: A City of Bryan Special Report
Another special report that Ryan Stout and I conceived was to focus on the Bryan Animal Center, showing the entire scope of an animal’s life at the shelter – from intake to adoption, and everything in between. Through photos, video and explanatory graphics and text, we took readers on a journey through the intake process, the long waits for adoptions, and then ultimately the happiness of the adoption process or the heartbreak of euthanization. It was a very touching, emotional, and rewarding project, and in partnership with our local CBS television affiliate, we were able to cross-promote our project with a similar story they were doing to help raise awareness about the animal center. 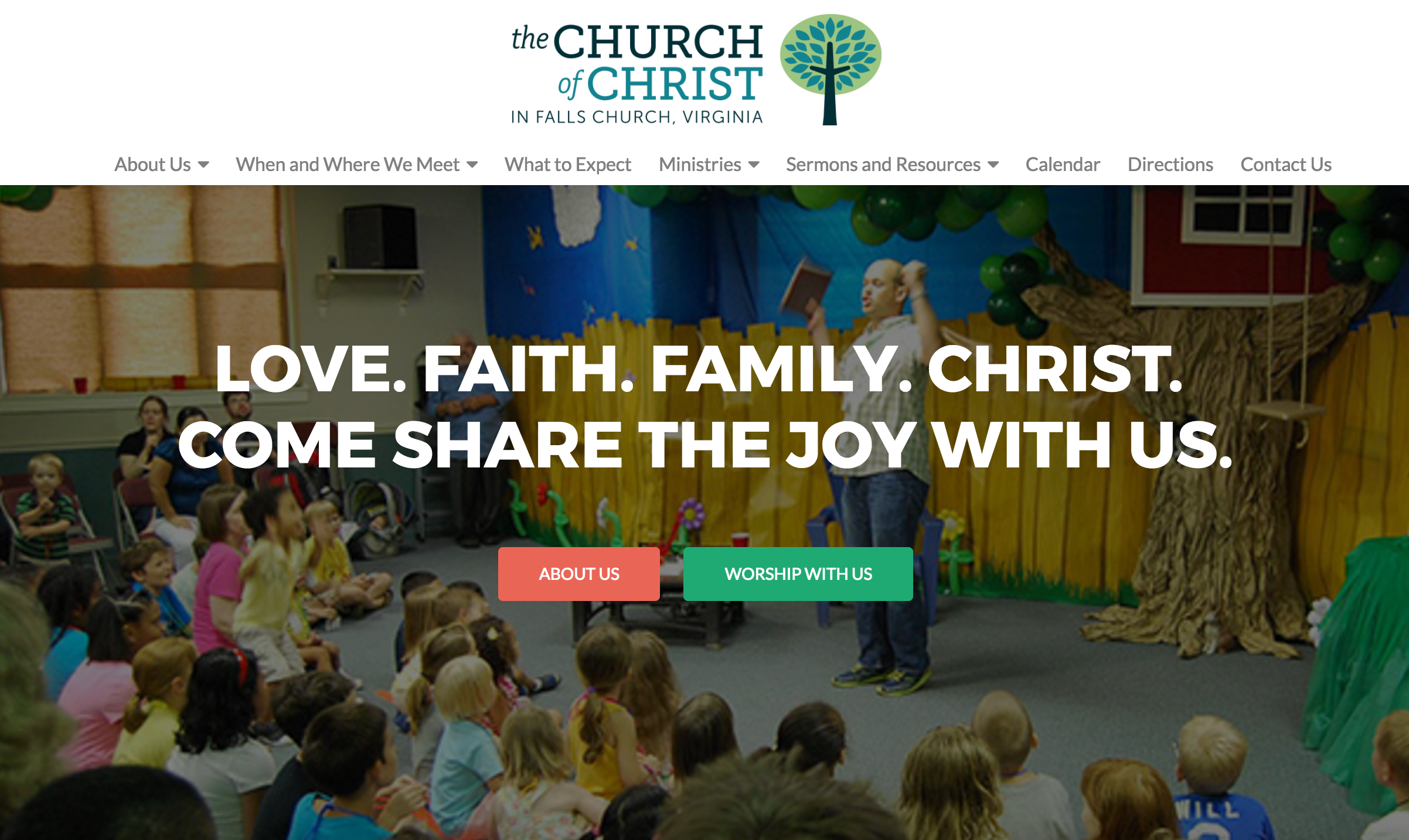 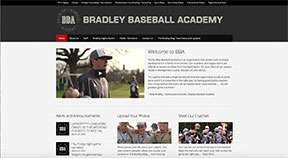 Bradley Baseball Academy
The official Web site of Coach Andy Bradley’s instructional academy and youth baseball teams: the Bradley Eagles. This is my second go-around with Coach Bradley and his organization. I created their site in 2011 and redesigned it in early 2015. 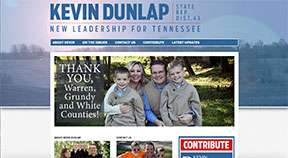 Kevin Dunlap: State Rep. District 43
The official campaign website of Tennessee State Rep. Kevin Dunlap (D-Rock Island). Rep. Dunlap was a first-time candidate in 2014, and defeated the Republican candidate in the District 43 Tennessee State House race. I have been friends with Kevin since we were 5 years old, and it was a privilege to design and build his website and provide counsel to him on digital communications during his campaign. 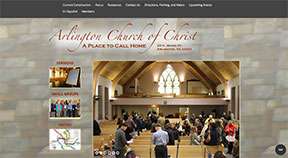 Arlington Church of Christ (Arlington, Va.)
Website for the Arlington Church of Christ in Arlington, Va. Arlington wanted a completely new look and feel for their site to go along with a new major church construction project being launched. Their old site had been hosted and designed by a company that specialized in hosting and designing church websites. They turned to me to give them that custom look and feel, as well as the specialized attention that their site wasn’t getting from the big hosting company. 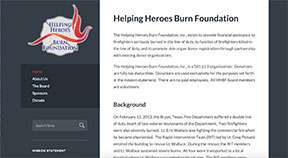 Helping Heroes Burn Foundation
The Helping Heroes Burn Foundation, Inc., exists to provide financial assistance to firefighters seriously burned in the line of duty, to families of firefighters killed in the line of duty, and to promote skin organ donor registration through partnership with existing donor organizations. I was honored to donate my time to create their initial website. 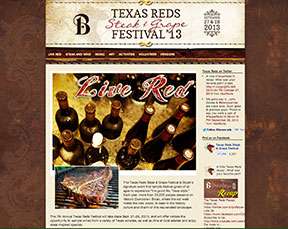 Texas Reds Steak & Grape Festival
Website for the annual Texas Reds Steak & Grape Festival held in downtown Bryan, Texas. The festival is put on by the City of Bryan, along with other sponsors and features a steak cook off, Texas wines, live music and other entertainment and vendors. The redesign of the Texas Reds site was not a complete overhaul, but it did change the design and feel of the site dramatically. This was the first project that I undertook upon starting my gig as webmaster for the City of Bryan in April 2013. 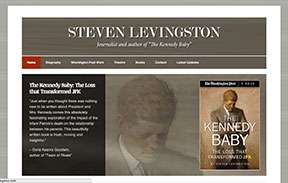 Steven Levingston
Professional website for Washington Post journalist, author, and playwright Steven Levingston. Levingston is the non-fiction book editor at the Post and is the author of the e-book: “The Kennedy Baby.” He is also the author of “Little Demon in the City of Light” which was published in early 2014. 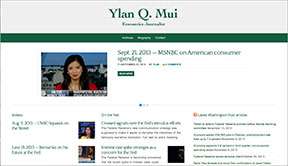 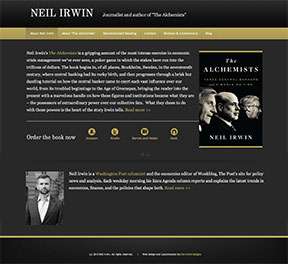 Neil Irwin
Professional website for New York Times journalist and author Neil Irwin. Irwin is a former columnist and economics editor of Wonkblog, the Washington Post’s site for policy news and analysis. He is the also the author of “The Alchemists: Three Central Bankers and a World on Fire.” 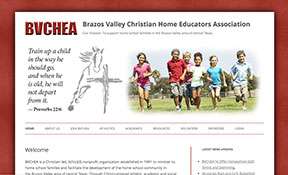 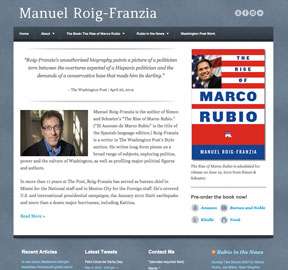 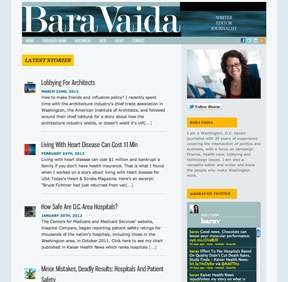 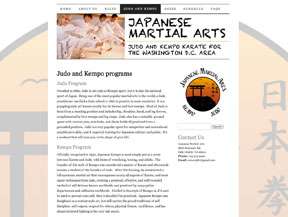 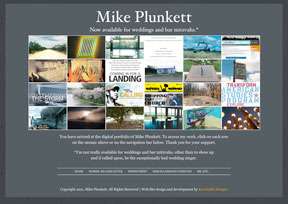 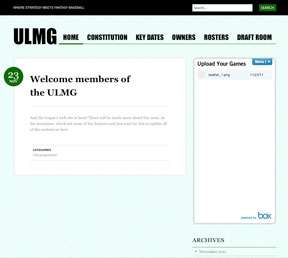 ULMG: A Strategic Fantasy Baseball League
A private Web site for members to communicate, update their team’s statistics, and draft their team online. (Commissioned by a friend who is a member of the league.) 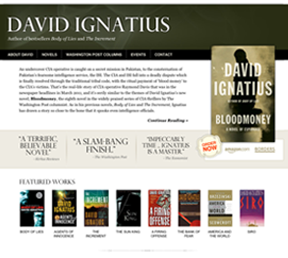 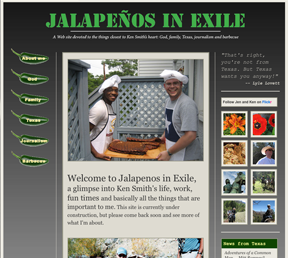 Jalapeños in Exile
This is my personal Web site/sandbox! Note: It’s perpetually under construction